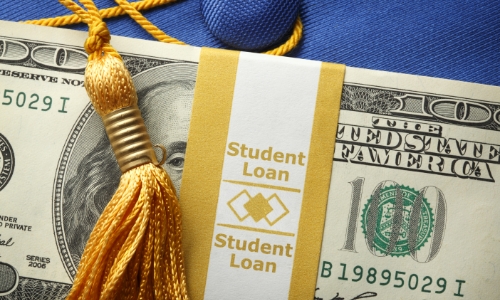 In 2011, student loans officially passed credit cards as the largest form of debt in the U.S. As the years have gone by, the total amount of debt has only increased as the average student now graduates with approximately $35,000 in debt according to The Wall Street Journal [1].

The story is one that by now is familiar: Jobs for recent graduates are still difficult to come by and even then, wages are stagnant. With high costs of living in many major cities, young individuals have difficulty paying back their loans, and even if they can afford the monthly payments, their money is stretched thin.

Because student loans require large payments for some, they are unable to save money for some of life's necessities, such as a retirement fund or an emergency savings account.

However, not all is lost, particularly when it comes to owning a home. Buying a house is a monumental life decision that, for some, signals the last step into adulthood. Yet today's young generation feel they cannot save for a house.

If this sounds like you, know that it is entirely possible to move out of that studio apartment to become a first-time homeowner. It will take dedication and strict money management, but you can absolutely buy a house even though you have thousands of dollars in student loans that have to be paid back.

Look at your DTI
Before you make the decision to purchase a home, you will have to look at your debt-to-income ratio. Essentially, DTI represents the percentage of your monthly income that is spent on paying off debts, such as credit cards, automobile loans, child support and student loans.

The equation to figure this out is monthly debt payments divided by your income. For example, if you bring home $3,000 every month and you pay $1,000 toward debts every month. Your DTI is 33 percent. Not only is this number important for your personal use, but mortgage lenders also take DTI into account when deciding if you are a reliable borrower.

According to Bankrate, lenders generally prefer borrowers to maintain a DTI less than 36 percent [2]. However, this number will fluctuate if you get a mortgage, so don't worry too much after it inevitably increases.

Student loans are included in your DTI depending on the type of loan and if payments are deferred or ongoing. In most instances, if you get a mortgage from a conventional lender or a loan backed by the U.S. Department of Veteran Affairs, student loans will be included in your DTI. The same applies if you obtain a loan through the Federal Housing Administration, unless your payments have been deferred for at least one year.

Fixing your DTI
As in most other instances, it is entirely possible to fix your DTI so you can get a mortgage. You'll have to follow strict budgeting and planning, but in the long run, you'll benefit.

First off, you'll have to make an effort to reduce your current debt. Try to pay off any existing credit card balances, auto loans and more. If these are smaller totals, you'll have an easier time paying these off, and once you free up money, you can put it toward a down payment and student loans.

The next recommendation is easier said than done, and that's to increase your income. With more income and less debt, your DTI will decrease. If you've been at your job for some time now and have been a top employee, consider asking about a raise or discussing the possibility of one. Otherwise, you may want to look for potential openings that offer a higher salary.

Finally, buying a house with lower property taxes and fees will actually provide more benefits than if you were to buy a condominium. This is due to homeowners association fees that come with owning a condo.

Owning a home is a big moment in everyone's life, and there is no denying that some individuals are feeling the economic strain because of student loans. But if you seek to eliminate your debts, you can move forward with your goal of buying a home even if you still have to pay off college loans.

[2]. 3 ways to tame student loan debt and afford a mortgage